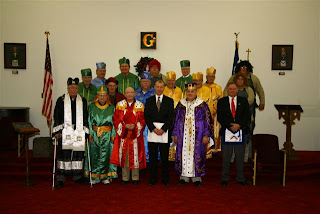 Well, I'm finally getting back to this blog to finish it. I started on Friday night. I wanted to write about a great group of friends and brothers that I hang out with and which really mean a lot to me...the Za-Ga-Zig Shrine Past Masters' Club.

We are a pretty close group of brothers working in the quaries of Freemasonry. We have two Past Grand Masters among our craft: M.W. Bro. Robert (Bud) Erickson PGM and M.W. Bro. Charlie Brinkerhoff PGM. Bro. Bud serves as our Club Secretary and scheduler. I have really come to think a lot of Bro. Bud through my work with the Shrine Past Masters. Bro. Junior Sharp (PSGW) is serving as our President in 2008 and he is ably served by Bros. Rick Martin (1st VP) and Floyd Nesbitt (2nd VP) both from Crest City Lodge in Creston.

Bro. Al Dunlap is our "driver". He is so dedicated in making sure all of our costumes are where they need to be when they need to be there. Another Bro. that isn't able to come much anymore, but was a real Shrine Past Masters "fixture" for so many years, was Bro. Lloyd Shank. Lloyd was raised in 1948 in Beatrice Lodge #26 in Beatrice, Nebraska. He will be a 60 year Mason on January 28th. Lloyd was the longtime secretary of the Past Masters. He always portrayed the 1st "R" and so ably. We all miss having Bro. Lloyd out with us on our outings.

Another brother that I fondly remember from the Past Masters' Club was Dean Walters. He was always the 2 "R" and had the distinction of wearing the red wig. When Dean was there, nobody else took that part. Dean has now passed to the Grand Lodge Above. Bro. Doyle Champion, another long time central Iowa Mason was a member of the group. Doyle too has passed to the Grand Lodge Above.

Bro. Bud always treats us to the Midnight Soliquoy and what a rendetion! He really gives it his all. The one line in there that has really made a big impression with me is "oh, what a piece of work man is"...I'm becoming cynical in my old age and always refer back to that line from Bro. Bud.

I heard on Saturday that we will be appearing at the Scottish Rite Park to put on a degree later on this year. I was really pleased to hear that. I know it will bring back a lot of memories for some of the older brothers who are no longer able to get out and attend lodge. I'm looking forward to this.

We have three degrees the last week of January. We will be at Arcadia #249 in Ames on January 31st. Come and see us...we put on a pretty good show!