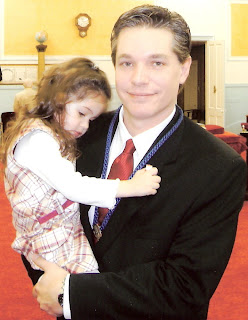 One of our new officers in Newton Lodge #59 this year is Bro. Mike Rush. He was raised in June of 2007 and he has been a great addition to our lodge. He already has earned the "Two to Grow" award. Mike is always thinking of ways that we make the lodge better and that is one of the things that I really like about him.

Mike did a lot of research on the Masons before he decided to petition. He was not one of those guys that someone just "talked" into joining. He knew what the Masons were about before he came in. He and I have had some great talks about Freemasonry and what new Masons are looking for.

Mike and his wife are both originally from Canada. It is interesting to hear him talk about differences between our two countries. Another thing that I enjoy about Mike is his "bantering" with Bro. Al Jensen...I think Al might have met his match with this brother!

He is a great guy and has become a good friend. I know he is also a great dad. The picture is of him and his daughter Taylor at our installation yesterday.
Posted by wade at 6:04 AM