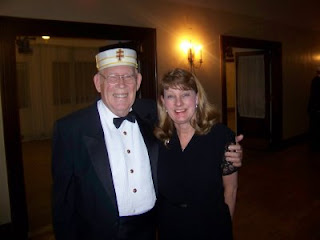 
Iowa Masonry lost a true craftsman today and I lost a good friend. Bro. Lyle Johnson passed to the Grand Lodge Above and received the Masters' Word from the Master Builder.

Lyle was a "Masons' Mason". Although Sioux City was home to him, he truly was a brother to all Masons throughout this great state. Lyle was one that traveled far and wide and brothers in all corners of the state knew and loved him. Whenever you saw him, you were always greeted with a great big smile, a hearty hello and a friendly handshake. It was always a treat to see Lyle and spend some time with him. He truly was a living embodiment of Masonry.

Bro. Lyle was raised in Landmark Lodge No. 103 on February 29, 1960 and served as Worshipful Master in 1979. He served the Grand Lodge of Iowa as Sr. Grand Deacon (1977-78); Sr. Grand Warden (1982-1983) and Deputy Grand Master (1985-1986). He was a member of Sioux City Chapter #62 RAM; Zadok Council #24 R&SM and Columbian Commandery #18 K.T. He served as Grand Commandery of the Grand Commander Knights Templar of Iowa during 1998-1999. He was a member of the Scottish Rite Bodies in Sioux City where he had been coroneted a 33rd degree. He was a member of Abu Bekr Shrine and Isis Chapter 173 O.E.S. where he had served as Past Patron. Lyle was also a member and past sovereign of St. Bartholomew Conclave Red Cross of Constantine.

My friend and brother, you are going to be very much missed by all of us. You were a friend to each and everyone of us. May you enter into the Glory of the Grand Lodge Above and hear from the Master those welcoming words: "Well done good and faithful servant, enter thou into the joy of thy Lord". Rest in Peace until we meet again.
Posted by wade at 6:02 PM

This is a beautiful tribute to one of the finest Masons I have ever known. Your words show the depth of feeling for Lyle that all of us who knew him felt. He is now at peace and we leave him in the care of his Father and ours. j