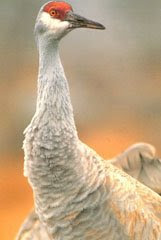 On Thursday of this past week I had the pleasure of seeing a natural wonder that I had always wanted to see. I drove to Kearney Nebraska to give a presenation to the Mutual Insurance Association of Nebraska (which I gave yesterday). Between Grand Island and Kearney, I was able to witness the migration of the Sandhill Cranes through the Platte River valley.

On each side of the I-80, I was able to see cranes in the fields. I had always wanted to see this annual miracle of spring, but the timing had never been right to drive over to Nebraska to see it.

The cranes starting arriving in the Platte River valley in early March and generally stay for around a month. They are on their way back north. They winter in Texas (generally on the golf side). On their way back north, they fly as far north as Nebraska and then spend a few weeks there resting and replenishing themselves. This has been going on for thousands of years.

The cranes go as far north as Alaska, Siberia and the Artic Cirlce to nest and spend the summer months. I visited the Rowe Audubon Sanctuary (www.rowesanctuary.org) at Gibbon Nebraska. It was a really neat place. While there I visited with one of the rangers, he told me that that the migratory route of the birds from Texas to their summer nesting grounds range from 5000 to 6000 miles. During my visit, they were estimating there were up to 400,000 cranes in the Platte River valley.

Cranes are some of the oldest known birds in existence. Fossils dating back 9 million years have been found in Nebraska, putting them there long before the Platte River was born (a youthful 10,000 years ago).

There are 6 species of Sandhill Cranes (three of which are migratory). The cranes that I saw generally weigh around 5 to 8 lbs. During their stay in Nebraska, they will gain up to addtional 10% of their body weight. They feed on left over corn in the fields, but they also feed on earthworms and other grubs/insects they find in the fields. It has been estimated during the monthly long stay in Nebraska, they consume up to 1600 tons of left over corn in the fields.

During their stay, it is common to see pairs engaging in mating dancnes (which I observed). They will dance around and spread their wings, hopping up and down. Sometimes they will pick up a corn stalk and throw it high in the air. Generally, two eggs will be laid once they get up to their nesting grounds. Generally only one survives to adulthood.

The red piece on their heads is not feathers, but is actually bare skin. I suppose since they are always pecking away in the fields, that over time they have simply developed to not have feathers there.

This was a really neat site to see. As I said it was something that I had always wanted to see and finally the timing was right. Go out and look at the website for Rowe Sanctuary. They have a webcam and you can actually see birds out there.
Posted by wade at 3:36 AM