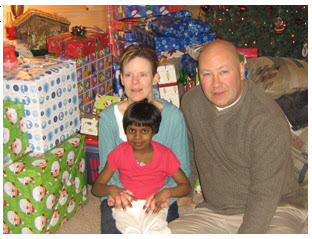 This morning I went to Altoona to Clay Elementary School. The brethren of King David Lodge #407 were having a benefit pancake breakfast to help the family of one of the brothers of their lodge, Bro. Ernie Landwehr.

Ernie and his wife Nancy have adopted a little girl from India, Maddie (age 7). Maddie's story is quite a story. Back in February 2000, Maddie was abandoned at birth in the highlands of Akola, India. She was left by the side of a tree at birth by her mother. Before she was found, some wild dogs attached her, permanently damaging her right hip and leg. When she was rescued, she was taken to a hospital for surgery and treatment. No one thought that she would survive, but she did. One of the caregivers at the hospital, gave her the name "Aaditi", which Mother of Angels. Eventually she was placed in an orphanage in Pune, India. That is where Ernie and Nancy Landwehr come into the picture. They adopted little Maddie and brought her to Iowa.

The Nobles of Za-Ga-Zig Shrine in Altoona saw to it that Maddie was taken to the Shriners Children's Hospital in Minneapolis for treatment of her hip and leg problems. Maddie has had a hip surgery and leg lengthening at the hospital in Minnesota. Little Maddie has now been diagnosed with Fanconi Anemia and is in need of a bone marrow transplant. The donor will probably need to be an individual of Indian decent.

Brother Ernie was so moved by the care that his daughter was receiving at the Shriners Hospital in Minneapolis, that he asked how he could become a Shriner. He joined King David Lodge #407 and then Za-Ga-Zig Shrine.

As mentioned above, this morning I went to a benefit breakfast for Maddie. The brothers of King David were there in the kitchen and dining room. The dining room had several Shrine clowns. I saw and experienced the spirit of Masonry this morning, brothers helping a brother.

I brought this little girls' situation to the attention of my lodge this past week during our stated meeting and I am proud to say the brothers stepped forward with a donation. Our Shrine Club in Jasper County has also stepped up with a donation. I visited with Maddie's Hospital Dad this morning. He told me that five minutes with Maddie and you are "hooked" on this little girl...she is that special. She is truly

This little girl and her family are going to need a lot of financial and moral support to help them with this situation. We need to remember this family in our prayers. Please visit Maddie's website (www.helpmaddie.com) and read about her story. I encourage you to help support this brother and his family during this time of need.
Posted by wade at 7:28 AM