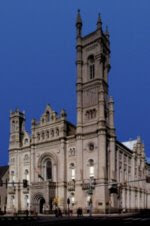 I was recently in Philadelphia to attend a CPCU meeting and I have the wonderful opportunity of visiting the Philadelphia Masonic Temple...what a gem! It was definately the most beautiful and ornate Masonic building that I had ever been in.

The building was completed in the early 1870s. It has 7 huge lodge rooms in it. Most of these rooms are the size of the main auditorium in the Des Moines Scottish Rite Consistory building. Probably my favorite was the Egyptian room since it was so unusual in character. The Temple also has a wonderful museum in it. I got to see one of George Washington's Masonic aprons and also several items that had belonged to Benjamin Franklin. I will have to say thought that there library definately paled in comparison to the library of the Grand Lodge of Iowa.

The building is going through a renovation (tuck pointing) on the outside so it was covered with scaffolding from top to bottom, so didn't really get much of a view of the outside of the building. I did get to meet the wife of the Grand Master though! She was in the gift shop. Her husband just happened to be somewhere up on the building inspecting some of the tuck pointing she noted. The Grand Master of Pennsylvania serves a two year term and is called "Right Worshipful" instead of "Most Worshipful".

While I was there I had the opportunity to visit Robert Pemberton Lodge #487 for two first degrees. Robert Pemberton was a Past Grand Master of Pennsylvania, Mayor of Philadelphia and one of the driving forces in building the Philadelphia Masonic Temple. That was very interesting, definately very different than Iowa ritual. I sat next to Bro. John Bratz (a 60 year member and Past Master of #487). He and I had a really nice visit. He was quite a guy. During the degree, I kept hearing him muttering the ritual and everyone once in awhile he would have to give someone a prompt.

The thing that always strikes me when I visit a lodge outside of Iowa is how warmly you are received...that is the true beauty of Freemasonry in my estimatation. Wherever we go in the world, we can find brothers of our great fraternity who enjoy being in one another's company. Pennsylvania was the fifth state (other than Iowa) where I have sat in lodge. It is a neat experience to have when traveling.
Posted by wade at 4:41 AM