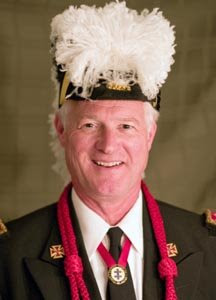 Last Saturday evening I had the pleasure of attending the reception of R.E. Sir Knight David M. Dryer, Grand Commander of the Grand Commandery Knights Templar of Iowa. It was a honor for me to go to Des Moines that evening to honor such a hard working Mason. There are definately a lot of brothers out there who are real "troopers" in the quarries of Freemasonry, but David has to be one of the best. How he keeps everything straight is beyond me. He has revitalized the Des Moines York Rite Bodies into probably the strongest York Rite in Des Moines.

He never seems to get discouraged, but is always "encouraging" others to keep fighting and building. Last evening I was in Marshalltown for the stated meeting of St. Aldemar Commandery #30. We had the pleasure of receiving David. He gave a very good talk at the conclusion of the meeeting. One thing that I admire about David is that he is always promoting all of Freemasonry...the Symbolic Lodge, the Scottish Rite, and the York Rite. In his talk last evening, he mentioned Templar Park which used to be up at Okoboji. Although it is no longer there, David still wants to honor it as a part of his year as Grand Commander. I thought that was a really neat idea.

Here's to a great friend and brother. Have a great year as Grand Commander. You are one of the truly bright spots in Freemasonry in Iowa.
Posted by wade at 4:56 AM

Great and so more info!!!

Hopefully, i can share with you ti find out more information about Boot Dryer at www.boot-dryer.co.cc