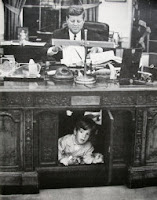 One of the "central" characters in National Treasure-Book of Secrets is the Resolute desk which is used by the president in the oval office. I remembered that the Resolute Desk was the desk used by President Kennedy in the Oval Office. Do you remember "John John" looking through the door in the front center of the desk?

Here is some information about the desk that I found to be interesting.

HMS Resolute was an Arctic exploration ship of the British Royal Navy.

Originally a Tyne built vessel named Ptarmigan, Resolute was purchased by the British Government in February 1850 and commissioned into the Royal Navy originally as HMS Refuge, but was renamed HMS Resolute a month later. The ship was fitted for Arctic service by Green's of Blackwall (Thames), with especially strong timbers and an internal heating system.

In 1852, HMS Resolute was part of a four-ship expedition under Edward Belcher, investigating the fate of the John Franklin expedition, which had searched for the Northwest Passage to Asia. The Resolute and one of her sister ships became lodged in the Arctic ice of Viscount Melville Sound and was abandoned there in 1853.

Two years later, the empty ship was found by the American whaler George Henry, captained by James Buddington of Groton, Connecticut. She was then stuck in the ice of Davis Strait off Baffin Island, 1200 miles away from where she had been abandoned. The Americans freed Resolute from the ice and took her to New London, Connecticut. The United States Congress bought her for $40,000 and then had her refitted and sailed to England, where she was presented to Queen Victoria on December 17, 1856 as a token of peace.

The HMS Resolute then served in the Royal Navy for over 20 years, but when she was retired in 1879, Queen Victoria ordered some of the timbers of the ship to be made into two desks. One was placed in Buckingham Palace, and the other was presented to U.S. President Rutherford B. Hayes in 1880. Since then, the U.S. desk - known as the Resolute desk - has been used by every president except Lyndon Johnson, Richard Nixon and Gerald Ford. Most presidents have used it as their official desk in the Oval Office, but some have had it in their private study in the Executive Residence.

The desk has twice been modified. Franklin Roosevelt had the whole desk raised on a 2inch base to accommodate his wheelchair. He also requested that the kneehole be fitted with a modesty panel carved with the presidential seal (he preferred people not see his leg braces and often placed a waste basket in front of his desks), but he did not live to see it installed. When President Reagan came into office in 1981, the desk was raised up on a 2 inch base to accomodate his chair which he had brought from his days as Governor of California.

The hinged panel was commissioned in 1944 but was not delivered until 1945, following Roosevelt's death. President Truman had the panel installed anyway. The panel features one of three presidential seals in the White House that has the eagle's head turned towards the 13 arrows in the eagle's left talon as opposed to the more common eagle turned towards the olive branch in the right talon with the 13 leaves. (One seal is over the entrance to the Diplomatic Reception Room on the ground floor of the residence; the other is in the cornerstone of the East Wing.)

There are four replicas of the desk residing in Presidential Libraries: Kennedy Libary in Boston, Carter Library in Atlanta, Reagan Library in Simi Valley California, and Clinton Library in Little Rock.

If you are interested in purchasing one for your home study, you can at www.resolutedesk.com. Starting price is $7,500 and goes up to $14,500. Price varies with size and the wood.
Posted by wade at 11:18 AM

The most informative book about this ship that ended up as a piece of Presidential furniture is called "HMS Resolute" by Elizabeth Matthews. Resolute stopped a war between the US and Britain, and the desk symbolises the start of the special relationship between the two countries. Not a bad investment by the US Congress of $40,000 back in 1855 when you consider the peace dividend the old Resolute has paid back over the last 150 years!

Great collection of Office Desks that decorates your office in a modern way.