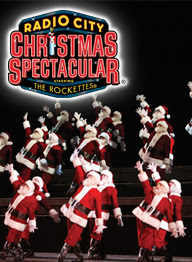 The Radio City Rockettes have been at the Des Moines Civic Center since December 6th. Today is the end of their performances in Des Moines. Danene and I saw their peformance on the afternoon of December 22nd. This was my anniversary treat to her. What an awesome show! For those of you who missed it, you missed a real treat.

Des Moines was one of seven cities that the Rockettes performed in this Christmas season. Other cities were Chicago, Costa Mesa, Ft.Lauderdale, Nashville, Phonenix, and Tampa. Des Moines was the smallest city they had ever brought their touring company to, so it was a real treat for Iowa. This was the 75th annivesary of the Rockettes Christmas show.

I always had thought of the Rockettes as just being a bunch of beautiful young female dancers with awesome legs doing high kicking performances. I was wrong, it was that and so much more.

Some of their more memorable scenes were the "Twelve Days of Christmas", the "Parade of the Wooden Soldiers" and the grand finale was the "Living Nativity" which featured live animals.

Seeing this performance of the Rockettes will be something I will long remember.
Posted by wade at 12:30 PM