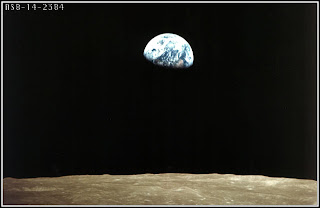 This evening as I was watching the evening news, one of the spots was on the Christmas Eve orbit of Apollo 8 around the moon. This was the first time that a spacecraft from planet Earth had come into lunar orbit. Astronauts Frank Borman, Jim Lovell, and William Anders closed their broadcast that evening with each of them reading a passage from the book of Genesis. One of those men on that flight was Bro. Frank Borman. What beauty was shown to humanity that evening as we humans here on earth actually saw for the first time the handiwork of God in creating Mother Earth.

Apollo 8, the first manned mission to the Moon, entered lunar orbit on Christmas Eve, December 24, 1968. That evening, the astronauts; Commander Frank Borman, Command Module Pilot Jim Lovell, and Lunar Module Pilot William Anders did a live television broadcast from lunar orbit, in which they showed pictures of the Earth and Moon seen from Apollo 8. Lovell said, "The vast loneliness is awe-inspiring and it makes you realize just what you have back there on Earth." They ended the broadcast with the crew taking turns reading from the book of Genesis.

"For all the people on Earth the crew of Apollo 8 has a message we would like to send you".

"And God said, Let the waters under the heavens be gathered together unto one place, and let the dry land appear: and it was so.
And God called the dry land Earth; and the gathering together of the waters called he Seas: and God saw that it was good."


Borman then added, "And from the crew of Apollo 8, we close with good night, good luck, a Merry Christmas, and God bless all of you - all of you on the good Earth."
Posted by wade at 4:50 PM