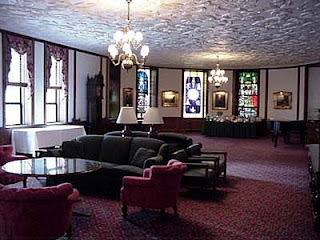 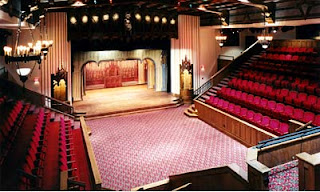 The other "Masonic" place I visited last week in Milwaukee was the Humphrey Scottish Rite Masonic Center in downtown Milwaukee. A real gem! The artwork and stained glass windows were just awesome. Apparently classes over the years, would donate a piece of original artwork as their gift to the Scottish Rite Temple. The building has a 350 seat auditorium and a pipe organ (not as big as ours though in Des Moines).

The woodwork in the building is awesome. It reminds you of old England...dark and heavy. The building had a 200 seat chapel with pews and an alter (it looks just like a church). There were two libary rooms (a 12,000 volume library) though it did appear to have need for some catalouging help (Jay and Kurt do you hire out?).

All of the closets where the costumes were hung were solid oak with brass hinges and locks on them. There was one case that housed all of the helmets used in the degrees (you could see them through the glass in the doors). They had two make up rooms with 4 sinks each...I have never seen the Des Moines guys use make up. We must have "natural beauty"!

Anyhow, it was a fun hour visiting with a great brother and a great Temple.
Posted by wade at 5:59 PM